What is Evidence Based Medicine?

EBM is "the conscientious use of current best evidence in making clinical decisions about patient care". This original definition is attributed to this article by Sackett, et al.

What is Evidence Based Practice?

EBP is a method of effectively translating EBM into clinical practice using the best existing: evidence and research, knowledge of clinical experts, and patient preferences. 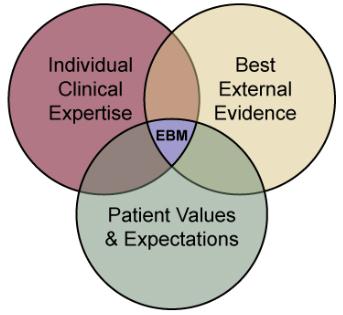 The Focus = finding evidence of the best methods, interventions and practices
The Evidence = found in the most current professional research literature
The Goal = best outcomes for the patient

Content on this page has been adapted from Karen Delorey's work on Evidence Based Practice. Karen Delorey is a Librarian at Mass Bay CC.

This Evidence Hierarchy Pyramid is often used to graphically represent the quality of medical research. The higher on the pyramid the more comprehensive in scope is the research, and more rigorous the methodology and peer review. You should be looking for the highest level of research available in EBP. 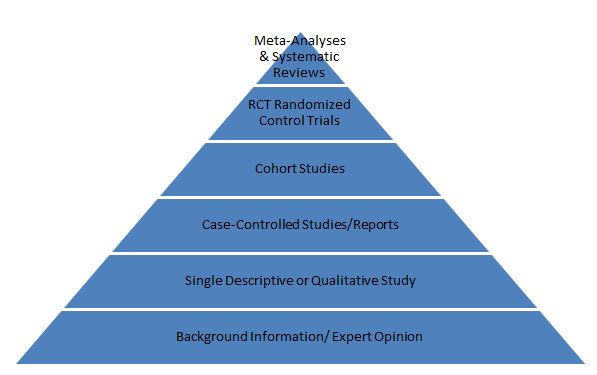 You may not always find the highest level of study related to your research. In the absence of the best evidence, you need to consider moving down the pyramid.

Randomized Control Trial: An RCT is a clinical trial in which the subjects are randomly distributed into groups that are either subjected to the experimental procedure (such as use of a certain rehabilitative treatment) or that serve as controls.  It is the research design considered to provide the most reliable evidence for evaluating the effectiveness of an intervention.

Case Control Study: A study where previously existing incidents of a medical condition are used in lieu of gathering new information. A group of patients with a particular disease or disorder, such as myocardial infarction, is compared with a control group of persons who have not had that medical problem. The two groups, matched for age, sex, and other personal data, are examined to determine which possible factor (e.g., cigarette smoking, coffee drinking) may account for the increased disease incidence in the case group.

Cinahl Complete
This is a Library EBSCO database. From the Advanced Search screen scroll down and select the Evidence-Based Practice limiter:

Additionally:
>You can limit your search to Meta-Analysis, Systematic Reviews, or Randomized Control Trials by selecting these formats in the Publication Box limiter.

PubMed Clinical Queries search on your topic and the center column will display evidence based research results. You may also want to review the first column Clinical Study Categories.

Practice Guideline: Clinical Practice Guidelines are systematically developed statements designed to assist clinician and patient decisions about appropriate health care for specific clinical circumstances, and are based on rigorous review of the best evidence on a specific topic.

The Cochrane Database of Systematic Reviews is the leading source of systematic reviews in health care.  The CDSR is one of seven databases in the Cochrane Library and is produced by the Cochrane Collaborative, the world's leading resource for evidence-based practice.

Cochrane reviews are indexed in Cinahl.