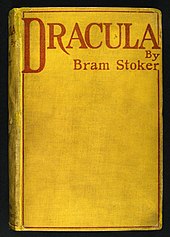 Written in 1897,  the scenes and themes in Dracula capture an array of Victorian norms. You will use the Library's databases to find secondary sources that discuss the story, the author, literary techniques, the historical context of when it was written, or when the story took place.

You could begin by looking for sources that talk about the story itself. Some search terms you could use in the library's databases could be,

You could research the story's historical context, late Nineteenth Century Britain. Some search terms you could use in the library's databases could be,

Nineteenth-century or Victorian - combined with

"The Italian anthropologist/criminologist Cesare Lombroso (1836-1909) - who wrote on the connection between genius and insanity - proposed a theory of criminality in the late 19th century (cf., Lombroso's atavistic theory - the outdated conjecture that some people are more like their distant ancestors than they are to their parents). According to Lombroso's type theory, criminals are throwbacks to prehuman evolution; he considered the physical characteristics of criminals to resemble the characteristics of prehistoric humans. For example, Lombroso argued that people with a receding chin, flattened nose, and low, flat forehead or other features of earlier forms of human life are more likely to be criminals. Lombroso showed that there is a relatively high incidence of these features among persons in jail. According to this approach, criminals are deformed physically and may, therefore, be identified easily. A variation on Lombroso's theory in 1888 is called the degeneracy theory of genius and refers to the overdevelopment of certain capacities or traits that are accompanied by various defects, indicating an instability of organization pointing toward degeneration. In this version, Lombroso suggested the innate disposition to criminal behavior as being associated with degeneration of hereditary cells, and he maintained that most criminals have physical signs (“stigmata of degeneration”) indicating the innate, constitutional disposition to crime. Surprisingly, for a while, the Lombrosian theory was widely accepted, in spite of the fact that there was an equally high incidence of “criminal features” among non-criminal populations as there was among criminal populations."

When researching degeneration, try some of the keywords listed below to locate resources in the Library's databases.