Book an appointment with a Librarian for more in-depth help through Navigate.

Tom Tiede and Discussions about War

In the article "Another 'Copter's Comin'" by Tom Tiede, the author describes the harsh realities that soldiers, medical personnel, and civilians face during wartime. In class, you discussed how the military recruits soldiers with promises of prosperity, honor, education, adventure, and more. Yet the reality is quite the opposite. Not only do soldiers face harsh conditions, danger, and trauma in combat situations, they often face hardships and isolation upon their return.

The military uses a variety of tactics to recruit soldiers from a sense of belonging and purpose to opportunities for education and career growth. Recruitment campaigns often glorify war and exaggerate their resources and support. How do these campaigns compare to the reality that Tom Teide describes?

What it is like to be a combat soldier? Tom Tiede describes the scene in a field hospital during the Vietnam War. There are several quotes you could choose from this article to depict the suffering and hardships soldiers endure.

How are soldiers supported upon their return to civilian life? Soldiers often return from combat with both physical and psychological wounds that require a robust system to support. Does the VA provide adequate support? Issues around mental health, homelessness, substance abuse, unemployment, disability, and others show how the VA fails our veterans. 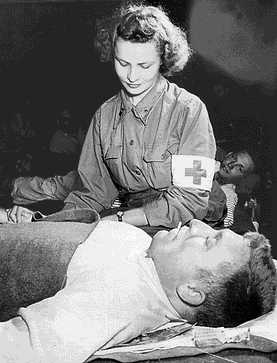 "Another Copter's Comin' In, Cap'n" by Tom Tiede discusses some of the harsh realities of war. The Vietnam war marked a shift in our perceptions of war. World Wars I & II were glorified as just wars. Our soldiers were exalted and admired. The depictions of these wars in the media were overwhelmingly positive and censored. With each subsequent war and each new development in technology and communications, we've been exposed to more and more graphic information about the horrors of war.

"It's all too easy to think of anything counted in the millions as an abstraction -- even if it's World War II, and the topic at hand is the millions of lives lost. That's what makes "The Fallen of World War II," a short visualization by filmmaker Neil Halloran, so impactful. The 18-minute long video, released on Memorial Day, breaks down the war's tragedies with a deeply engaging look at the shocking number of people who died, where they came from, and how they lost their lives."

In order to find your secondary sources for this topic, you will need to search in the library's databases. You will find direct links into the databases as well as suggestions for search terms to use to search for more sources below. Explore the databases and try out some of the suggested keywords when searching for your secondary sources. Be persistent and flexible! If you are not finding what you need, change your keywords. If you need help, reach out and ask a Librarian.

"Another Copter's Comin' In, Cap'n" by Tom Tiede discusses some of the harsh realities of war. The issues raised in this article revolve around the experiences of soldiers and veterans and how they differ from what is depicted in recruitment campaigns.

Some search terms or keywords you could use to begin your search are listed below. Search for each of these aspects separately.